When Ronnie Govender and I left the Durban Academy of Theatre Arts (DATA) to form our own theatre company, Ronnie decided on the name Shah Theatre Academy in honour of Krishna Shah.  In 1962, after Shah’s successful off-Broadway production of Tagore’s King of the Dark Chamber, Union Artists of Dorkay House in Johannesburg brought Shah to South Africa to direct the play with lead actors Surya Kumari and Bhaskar and a local supporting cast.  The play toured the country and was well received. In 1963, Shah returned to South Africa to conduct a six-week workshop with budding playwrights, directors and actors at the St Aidan’s Hall in Leopold Street in Durban. The outcome of the workshop was a production of three one-act plays entitled Trio Against Trains, St Aidans Hall was right next to a railway line. Of the three plays that were produced, Ronnie’s play Beyond Calvary was the most powerful and striking and is still performed today.

When the workshop ended, the people who had been involved in it decided to form a permanent theatre group.  They were a group of people who had been actively involved in theatre for many years. With Pauline Morel as director, the group, which included Fathima Meer, Devi Bughwan, Hassan Mall and Ansuyah Singh, had staged many classical Indian plays, among them Shakuntala and plays by Rabindranath Tagore.  This group was the force behind the formation of DATA. The idea of Krishna Shah’s workshop had been to encourage the development of indigenous theatre and drama, but as there were no indigenous plays readily available, the organisers of DATA returned to the group’s former mode of operation which was to produce works of established playwrights. While DATA was involved in various productions, it was also working with Union Artists to bring productions from Johannesburg and overseas to Durban.  Then Dr Ansuyah Singh wrote ‘Cobwebs in the Garden,’ a play about Akbar the Great which was performed at the Orient Hall.

That DATA did not promote the development of plays by and about South Africans, was a source of great frustration, especially to Ronnie, and we left DATA to set up the Shah Theatre Academy.

At the time I was a teacher at the M.L. Sultan Technical College and with students had directed excerpts from their setwork, A Midsummer Night’s Dream – the scenes with Bottom and his rehearsal of Pyramis and Thisbe.  Mohammed Alli, a student at the Tech at the time played Thisbe, and he was one of the students from the Tech who formed the core of the new theatre company.  In addition, we were joined by Babs Pillay, Kessie Govender, Welcome Msomi, Guru Pillay and others.

The new company met over weekends for training in acting in the classrooms of an annex of the Tech.  While we were waiting for Ronnie to complete his play Nineboy, we put on a few productions.  The first was a revue, Christmas Nuts, which lampooned some apartheid institutions established for Indians such as the Indian Programme that was broadcast on SABC radio every Sunday morning.  We then put on a couple of American plays, Arthur Miller’s All My Sons and Clifford Odet’s Golden Boy as well as a performance of Miles Malleson’s translation of Moliere’s  A School for Wives.  STA also took part in a National drama competition in Orlando in Soweto with a performance of Synge’s Riders to the Sea and afterwards we had the pleasure of a visit from Ken Gampu at one of our rehearsal and training sessions at the Tech.  In addition to the performances mentioned above, at our workshops at the Tech, members of STA were writing one-act plays and on Sunday, 18 July 1965, Shah Theatre Academy put on a variety show at the Bolton Hall which included plays by Babs Pillay and my sister, Seetha Naidoo, and excerpts from Ronnie’s Nineboy. 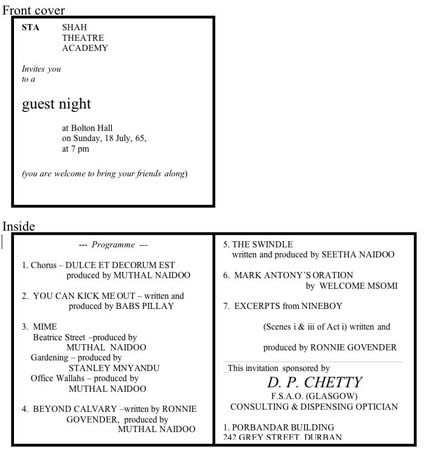 During the time that Krishna Shah was back in South Africa to direct Alan Paton’s Sponono, which premiered at the new M.L. Sultan Technical College Theatre, we were still members of DATA and were involved in front of house activities.  It was then that Shah suggested that I apply for a Fulbright Scholarship. I did and in August 1965 left for Indiana University in the USA where I discovered how little I knew about theatre and my stay of one year stretched out to eleven years during which time I worked with the Black Artists Group of St Louis and there for the first time explored my potential as a playwright.